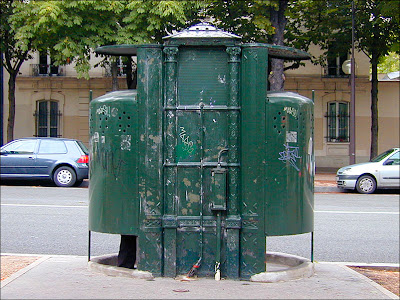 A vespasienne is a street urinal, and this is the last one still in use in the city of Paris (located directly in front of the prison on boulevard Arago at rue de la Santé, where the 14th, 13th and 5th arrondissements intersect). Photographer Anthony Atkielski (see image above) says, “Amazingly, it is still in use: while I was standing preparing to take this photograph, several men stopped their cars, got out, and used the urinal – you can see the feet of one in this photo. More amazing still, they were all wearing suits.”

In the 1930s there were upwards of 1200 street urinals like this scattered throughout Paris. The locals referred to them as vespasiennes, deriving the name from Roman Emperor Vespasian, who was the first to impose a tax on public toilets.

Beginning in the 1990s, the vespasiennes (renowned for their smell and lack of hygiene) were gradually replaced by self-cleaning, high-tech Sanisettes (modern gray sculpted pay toilets), which, by order of Mayor Delanoë, are now free of charge. There is a vespasienne that can be seen in the Luxembourg Gardens (not usable) which stands like a sculpture, a relic of times gone by. 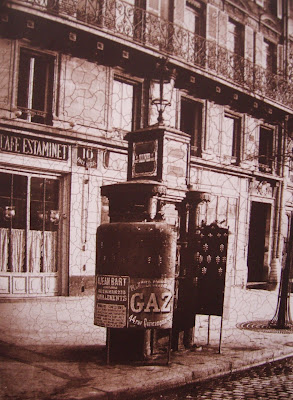