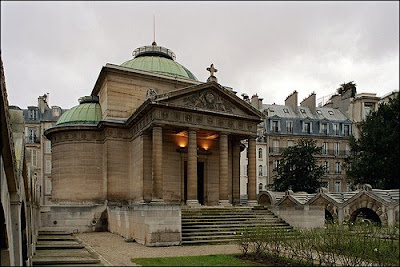 This “Chapel of Atonement” stands on the site of one of the more curious eternal resting places in all of Paris, the Madeleine Cemetery. The remains of its star tenants, Louis XVI and Marie Antoinette, are no longer located here, having been exhumed and removed from the site 21 years after their deaths by guillotine. In January, 1793, the body of King Louis XVI was hauled from the Place de la Concorde (where the guillotine was installed) to the Madeleine Cemetery, where his headless corpse was dumped into a mass grave and covered with quicklime. Nine months later the same fate befell the queen.

The Chapelle Expiatoire, whose construction was completed in 1826, is a royalist mausoleum built upon the grounds of that former cemetery. The site, located within the tranquil Square Louis XVI, on the south side of Boulevard Haussmann, includes this Greco-Roman necropolis, as well as an entry building designed in Neoclassic style.

The cemetery dates back to 1720, when it served as the new burial grounds of the parish of Sainte Madeleine (located a few blocks to the south), whose original cemetery had outgrown its capacity. Over the next eighty years more than three thousand bodies were interred here, most of them victims of the French Revolution, buried in mass graves.

Ironically, in 1770, the Madeleine Cemetery was used to bury 133 people who were killed in an accident resulting from a fireworks display during the wedding of the dauphin, Louis (the future king Louis XVI), and his Austrian wife, Marie Antoinette. On August 10, 1792, several hundred members of the Swiss Guard were slaughtered while making a heroic stand to protect the Tuileries Palace from a revolutionary mob. Their resistance allowed the King and Queen to escape to Versailles. All the bodies of the Swiss guardsmen were buried in the Madeleine Cemetery.

In 1802 the land in which the bodies lay was bought by Pierre-Louis Olivier Desclozeaux, a royalist lawyer who had lived adjacent to the cemetery since 1789. He had taken note of the sites where the King and Queen were buried and marked them with a hedge and several trees. In 1816, just after the bodies of the former king and queen were removed to St. Denis, Desclozeaux sold his house and the old cemetery to Louis XVIII, who shared the expense of building the Chapelle Expiatoire with his niece, the Duchess of Angoulême, daughter of Louis XVI and Marie Antoinette.

The Chapelle Expiatoire complex is entered through an entry hall that leads to a large enclosed courtyard planted with roses and flanked with grave markers in remembrance of the dead. Beyond that, the domed Chapel of Atonement is reached by climbing a set of stairs and passing through a facade supported by Doric columns. Above the entrance is a bas-relief sculpture commemorating the exhumation and procession of the remains of Louis XVI and Marie Antoinette to the Basilica of St. Denis (north of the city), the traditional repository of the remains of French royals.

A marble altar is centered along the back wall, and two marble statues stand to either side. To the left is Marie Antoinette “supported by Religion,” the work of Jean Pierre Cortot. To the right is the sculpture by Françoise Bosio which depicts Louis XVI ascending to heaven with the help of an angel. A crypt, accessed by stairs behind each statue, contains a black coffin that marks the original location of the bodies of the king and queen. 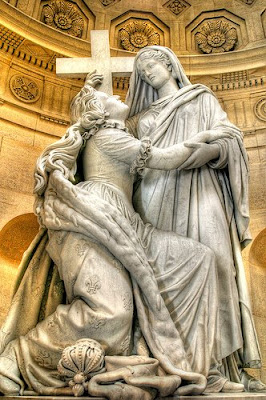 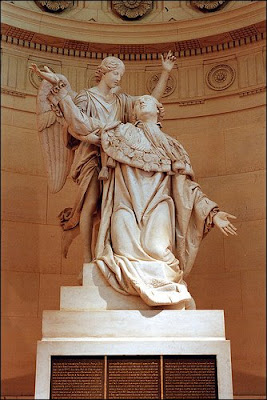 In addition to the royals, other notables who met their destiny in 1793 are commemorated at this site. Mme. Du Barry, mistress of King Louis VX, also fell victim to the guillotine. It is noted that she displayed none of the dignity of the king and queen; instead, her approach to the scaffold was hysterical, screaming and begging for mercy. Her remains were also later removed from the Madeleine Cemetery. The Bourbon Duc d’Orléans, cousin of the king, changed his name to Philippe Egalité and cast a vote for the execution of the king, but this did not prevent him from meeting the same fate. However, unlike Mme. Du Barry, eyewitnesses commented upon his courage and dignity in approaching the guillotine. Also interred here was Charlotte Corday, who was led to the scaffold just four days after she murdered Jean Paul Marat, whose incendiary writings she blamed for most of the terrors of the revolution.

The Chapelle Expiatoire complex combines history, art and architecture in an oasis of quiet from the activity of the surrounding city. It serves as the only monument to the French Revolution that is religious in nature. 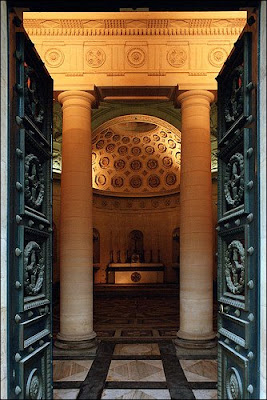 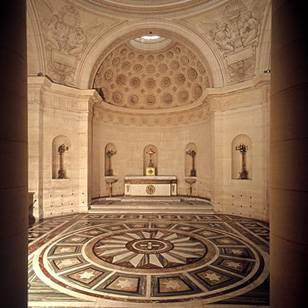 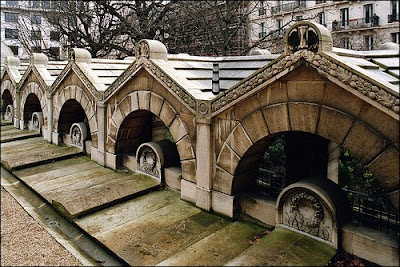 Along the garden perimeter, symmetrical arcades commemorate the hundreds of members of the Swiss Guard who lost their lives defending the Tuileries Palace in 1792.

Great post, Terry! I will link to it if you don't mind

Excellent post! I'm so sorry to have missed this chapel while in Paris. Next time!
Catherine

Nice pictures of the Chapelle expiatoire, Terry. Are they really all yours?