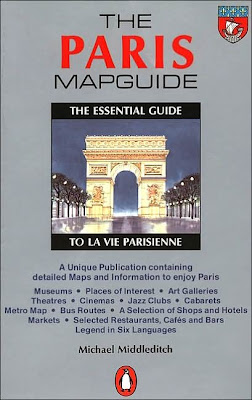 Forgot those annoying folding maps (even the laminated ones that flaunt rain and the occasional spilled drink). There is only one map of Paris worth owning, and that is the 64-page Paris Map-Guide by Michael Middleditch (Penguin Reference Books ISBN 97801414 69041; Third Edition publ. 2006). The scale is so large that restaurants, museums, hotels, etc. are shown as points accurately placed and keyed, so that you can tell which side of the street you should head for before venturing out; in the front is a large scale subway (Metro) map, and a complete street index occupies the last pages.

The legend is in 6 languages: English, French, German, Dutch, Italian and Spanish; all other text in English. At US $10 full retail, there is not a better stocking stuffer. Booklet measures just under 5.5" x 8.25"
Posted by Terry at 10:14 AM

I have been looking for this long time. Thanks for the map.