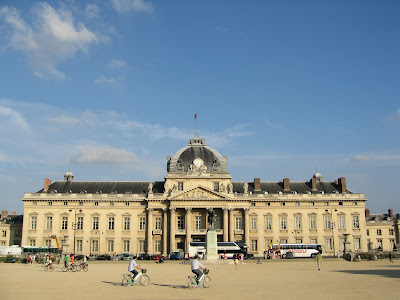 The École Militaire (Military School) is a large complex of buildings housing military training facilities. It sits on the Left Bank, bang opposite the Eiffel Tower across the vast expanse of the Champ de Mars.
It was founded by Louis XV in 1750 on the basis of a proposal of the financier Joseph Pâris (known as Duverney) with the support of Madame de Pompadour, for the purpose of creating an academic college for cadet officers from poor families. The main building was designed by Ange-Jacques Gabriel, and construction began in 1752 on the grounds of a former farm. The school did not open, however, until 1760. The Comte de Saint-Germain reorganized it in 1777 under the name of the École des Cadets-gentilshommes (School of Young Gentlemen), which accepted the young Napoleon Bonaparte in 1784; he was a superior student, graduating in only one year (instead of two). 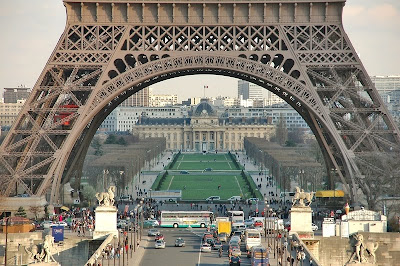 It now hosts two elite schools, the Joint Defense College and the Institute of High Studies of National Defense.
The neoclassical chapel is of particular architectural distinction. Louis XV laid the foundation stone of the chapel on July 5, 1769. Upon its completion in 1773, the chapel was dedicated to Saint Louis, the patron saint of the army. Until 1788, it was open for worship and welcomed students and staff from the military school. Napoleon Bonaparte received his confirmation there in 1785. Devastated during the Revolution, the chapel was turned into a canteen and then a feed and weapons depot. Its furnishings were dispersed. 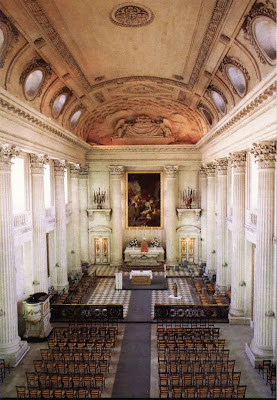 During the funeral of Marshal Joffre in 1931, the chapel was definitively cleared of all the items kept there. Its furnishings were recovered during the course of the 1930s and it was restored as a Catholic place of worship in 1951. The chapel is now open rarely, for weddings or other religious ceremonies and concerts organized by the Department of Defense.
Posted by Terry at 3:51 PM