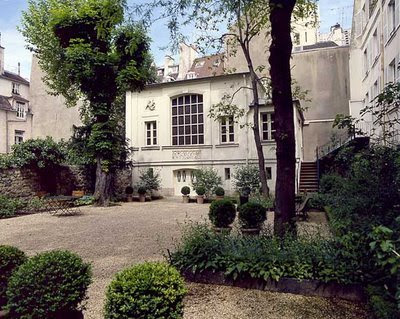 The Musée Delacroix offers a surprisingly intimate and scholarly perspective on 18th century Romanticist painter Eugène Delacroix, the artistic master behind the famous painting Liberty Leading the People (1830, on display in the Louvre). The museum is situated in the refurbished three-room apartment and atelier where Delacroix lived and worked from 1857 until his death in 1863. He moved here to be closer to Saint-Sulpice church, where he was commissioned to complete a series of frescoes. Sketches, watercolors, engravings, and letters to Théophile Gautier and George Sand are part of the permanent holdings, while occasional temporary exhibits showcase significant achievements in Delacroix scholarship.

There is a lovely enclosed garden (shown above) between the atelier – equipped with Delacroix’s original palettes and studies – and the artist’s private apartment. (6 rue de Furstemberg, 6ème., St-Germain-des-Prés. Behind the Église St-Germain, off rue de l’Abbaye. At the courtyard, follow the sign to the central atelier Delacroix).

Open 9:30am-5pm; last entry 4:30pm. Closed Tuesdays.
Admission €5. Access is just off to the right of the trees shown in the foreground in picturesque Place Furstenberg (shown below). 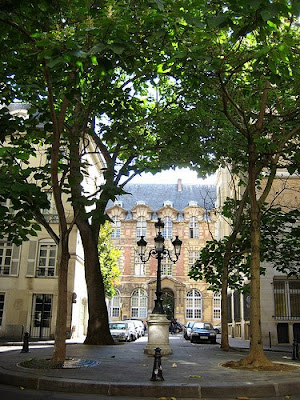 Note that one of the four paulownia empress trees is much larger than the others; the three smaller ones are replacements. If you come to this spot in springtime, you will treated to a magnificent display of lavender blossoms and gigantic new leaves. This is an ideal Parisian square, sunny in winter and shady in summer. If you are here for the first time, yet have a strong sense of déjà vu, it could be explained by your having seen Martin Scorsese's movie, The Age of Innocence, whose final scene was filmed here.
It is unfortunate that the benches that were located here had to be removed when this square became a hangout for an undesirable element; I remember when those benches on Place Furstenberg afforded an ideal spot for consuming a store-bought lunch. While I'm grousing, several times when I've visited this place recently, there have been hideous modern sculpture exhibits placed around the central lamppost, completely destroying the rather romantic atmosphere. But wait! I have another complaint: most of the bookstores and publishing houses that once populated this neighborhood have given over to shops and showrooms catering to the interior design trade; anyone who remembers Librairie Le Divan (since relocated) will know what I'm talking about. But I digress.
Posted by Terry at 7:10 AM

wow! I really love those pictures! and you have an interesting blog right there ;) I want to share this blog of yours to my blog at http://baraaza.com/, it's a great site where people can interact with each other and where most of them can share stuffs about traveling as well..;)