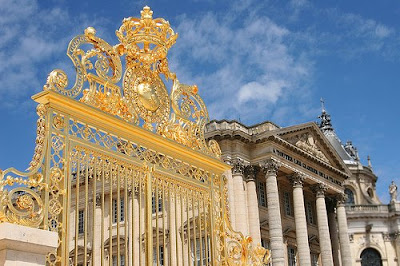 The original design of the royal golden gate of the Palace of Versailles has finally been restored, after being demolished during the French Revolution in 1789. It took over two years to replicate the original 260-ft. long gilded wrought iron fence and gate. This royal gate, which stands at the entrance to the cour d’honneur, provides an essential element of Versailles’ historical identity. It returns to this area in front of the château all its impressive, symbolic force.

100,000 sheets of gold leaf were crafted onto fleur-de-lys designs, crowns, masks of Apollo, cornucopias and the crossed capital Ls representing the Sun King, Louis XIV. Private donors contributed $8 million to rebuild the 15-ton structure, and an army of historians and top craftsmen were enlisted to ensure an exact replica of the well-documented original, designed by Jules Hardouin-Mansart in the 1680s. This new replica of the original, dedicated on July 8, 2008, stands atop a stone knee wall, as originally designed.

Experts studied 17th and 18th century archives and information from archaeological digs before deciding on the final installation. The gate is the centerpiece of a secure double enclosure separating the cour d'honneur from the royal courtyard, at the very heart of the palace. Versailles was the king's residence, and the whole layout aimed to demonstrate that one was approaching “his sacred person.” In fact, when the court worshiped in the Versailles chapel, only the king faced the altar. Everyone else turned around and faced the king, lest they forget who was the most important person in the room. At banquets, members of the court had to bow and curtsy to the platters of food that were intended for consumption by the king. Thus, this imposing gilded fence and gate were but a foretaste of what one could expect once on the other side of it. 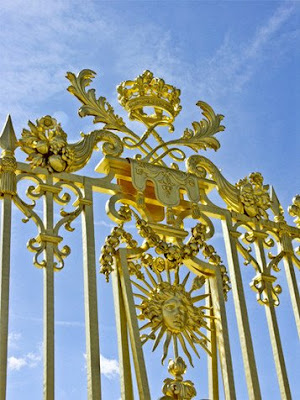 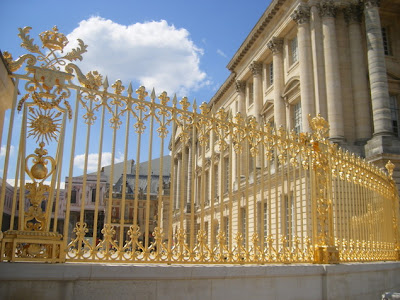