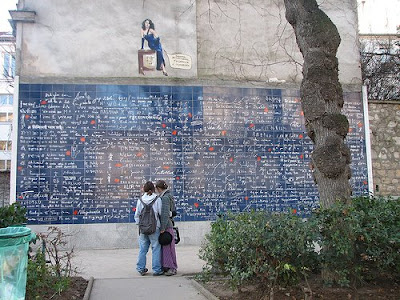 Just off Place des Abbesses is a small park, Square Jehan Rictus, which is a pleasant shady corner of green offering a few wooden benches for a rest from navigating the steep streets of Montmartre. Its chief attraction, however, is “Le mur des je t'aime” – the wall of “I love you.” This wall is crafted of 511 enameled dark blue tiles that display the words “I Love You” in over 300 languages (311, to be exact). All of the languages from the 192 member states of the United Nations are reproduced. Equally represented are less known languages such as Dzongkha, Khirghiz and Bislama – plus Basque, Bambara, Catalan, Corsican, Kurdish, Innuktitut, Navajo, Occitan, Yiddish, and many others.

In 1992, as a disciple of Jules Verne’s character Philéas Fogg, composer/performer Frédéric Baron dreamed of a trip around the world in 80 "I love yous". He did not stop at 80, however. He asked his younger brother to write down the magic phrase. Then he turned to a neighbor who was Spanish or Portuguese or Russian – and so on. He opened many doors, particularly those of Embassies. In harvesting the most beautiful expressions of love, three large notebooks were filled with "I love you" written 1000 times in more than 300 languages. Then Frédéric Baron asked Claire Kito, an artist who practices oriental calligraphy, to design the collection of scripts. From their collaboration was born the image of a wall on which the principal languages and dialects of the planet glittered. Specializing in murals, Daniel Boulogne also fell in love with the project and successfully brought to completion the construction of this work of art.

The wall has its own web site at:
www.lesjetaime.com/english/index.html
Be sure to click on “virtual tour.”

Thirty-two of the languages have sound files for correct pronunciation at:
www.lesjetaime.com/english/qui.html

Freight Forwarder said...
This comment has been removed by a blog administrator.
April 2, 2009 at 4:42 AM

I love to find places like this in the cities I visit. Next time I have enough royal Holiday vacation points available I will go to visit this great Paris spot. Thanks for turning us away from touristic traditional spots.

This post is very useful for those people who are used to for travel world wide and who are always to ready for go abroad, specially for those people who want to go European countries like UK. You blog is not a blog it is a informational guide for us. we appreciate your work. Keep it up