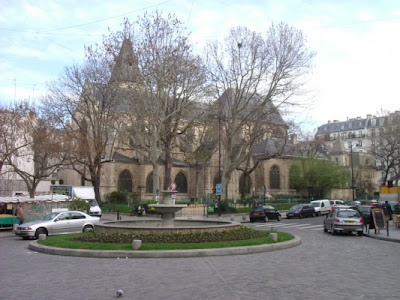 Saint Médard, in the 5th arrondissement

The church of Saint Médard was mentioned by Pope Alexandre III when he came to Paris to lay the first stone of Notre Dame Cathedral in 1163, but construction continued in fits and starts until 1632. A new sacristry was added in 1718, and it was not until 1901 that the chapelle des catéchismes was completed. Nowadays the church is a quiet, unassuming place surrounded by trees with a little park next to it. The church property marks the end of the southern extremity of the ancient and colorful Rue Mouffetard, which dates back to Roman times.

However, Saint-Médard was the scene of bizarre events in the early 18th century. These incidents involved people who became known as the Convulsionnaires de Saint Médard, and the collective hysteria which took place during a five year period is notable.

It started with the teachings of Jansénius, Bishop of Ypres, who had published a theological treatise in 1640 about the doctrines of St. Augustin regarding the health of the soul. Jansenism, as this movement was called, was a heretical doctrine that emphasized predestination, denial of free will, and the idea that human nature is basically rotten. Internal conflicts with church authority ensued, resulting in crack-downs by the Pope.

Saint Médard became a place of pilgrimage for these Jansenists when the Deacon François de Pâris was buried there in 1727. Claims of miracles and visions by pilgrims to his tomb gave rise to fanatical crowds visiting the church. People became entranced, rolled on the ground, barked like dogs, and some even ate earth from near the tomb. Others in their hysteria had themselves crucified or pierced their tongues. The scene lasted five years before access to the cemetery was bricked up in 1732 by order of King Louis XV, who ordered a sign that read, “By order of the King, God will perform no more miracles here.”

The present choir of this ninth-century church was built between 1550 and 1586 and the vaulting between 1609 and 1622. The inside was renovated between 1777 and 1784; today visitors may admire the pulpit, which dates to 1718, the eighteenth-century organ and three paintings by Natoire, Restout and Zurbaran. This is the only church in Paris in which persons guilty of cannibalism can receive absolution.

Trivia: Charles Tournemire, noted organist and composer, was organist here prior to 1897, when he accepted the post of organist titulaire at Saint-Nicolas du Chardonnet; he later achieved greater fame as organist at Sainte-Clotilde, which had been home to Cesar Franck. 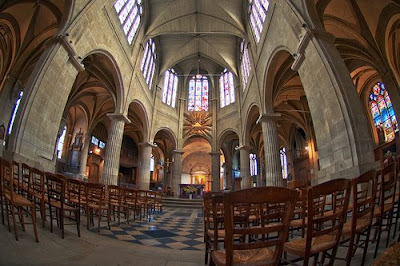 St-Médard interior photo by Mike Franklin:
http://flickr.com/photos/mikefranklin/
Posted by Terry at 9:21 AM

The reason why the church can cleanse the sin of cannibalism is due to the legend of a local butcher who every now and then carved up lonely Latin Quarter students during the 13th century (I think.) The unwitting prelates of Notre Dame were customers. To be cleansed, they were told to head for Rome. They made it as far as the end of Rue Mouffetard. There they stayed until rescuing a passing bishop from forest thieves. In thanks, the bishop pardoned them and let them set up the church here, plus rights to the local market. A side street nearby is named for them.