The Paris City Hall building (1533-1628), in French Renaissance style, was inspired by the Châteaux of the Loire Valley.

The Hôtel de Ville is the largest city hall in Europe. Located adjacent to the Seine (Right Bank) opposite the Île de la Cité, it has been the location of the Paris municipal offices since 1357. It serves multiple functions – housing the administration staff and the Mayor of Paris (since 1977), as well as a venue for important city receptions.
In July 1357, Étienne Marcel, provost of the merchants of Paris (i.e. mayor), bought a large building, known as the House of Pillars, for use as a city hall. It was located on the square next to the river port where wheat and wood were unloaded, then known as the Place de Grève (Square of the Strand). Parisians frequently gathered here, particularly for public executions.
In 1533, François I decided to endow Paris with a city hall which would be worthy of his capital, then the largest city of Europe. The House of Pillars was torn down and replaced by a magnificent Renaissance style city hall inspired by the Châteaux of the Loire Valley. Work on the building was not completed until 1628. As space became scarce over the centuries, two wings were added to the main building in 1835. They were linked to the original façade by a gallery.
On January 18, 1871, crowds gathered outside the building to protest against the speculated surrender to the Prussians, who had laid siege to Paris. Subsequently, revolutionaries demanding the formation of a commune (commons) style government set fire to the Hôtel de Ville, thus destroying almost all extant public records from the French Revolutionary period dating back to 1789. The blaze completely gutted the building, leaving only a stone shell. The reconstruction of the building recycled the stone shell, but the interior was completely new, with ceremonial rooms lavishly decorated in the 1880s style.
The building has been the scene of a number of historic events, notably the proclamation of the French Third Republic in 1870 and the famous speech by Charles de Gaulle on August 25, 1944, during the Liberation of Paris, in which he greeted the crowds from a front window.
The statue on the south side of the building is of Étienne Marcel. He came to an inglorious end, lynched by an angry mob after trying to assert the city’s powers a bit too energetically. The current mayor, Bertrand Delanoë, a socialist and the city's first openly gay leader, almost shared his fate. He was stabbed inside the building in 2002 during the first all-night, city-wide Nuit Blanche (Sleepless Night) festival, when the long-inaccessible doors were thrown open to the public. But Delanoë recovered and has not lost his zeal for public access. He has since converted the opulent mayor’s private apartments into a day nursery for the children of municipal workers. The Mayor currently resides in his own personal residence in the Marais.
The vast masonry square in front of the building is given seasonal treatment. In winter, it is the site of a popular ice skating rink; in late summer tons of sand is imported for beach volleyball games. For the second year in a row a temporary garden has been installed (mid-June through mid-August, see photo below) as a reminder of the efforts the city is making to return thousands of acres of city property to green space. These interior photos are by Jason Whittaker: 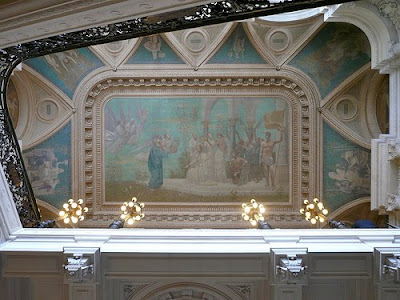 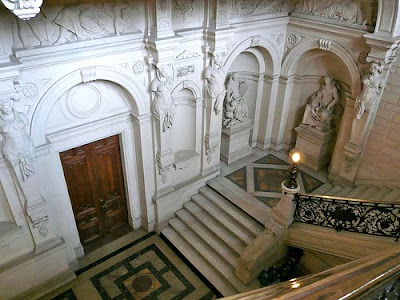 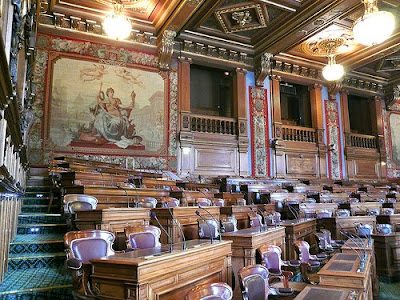 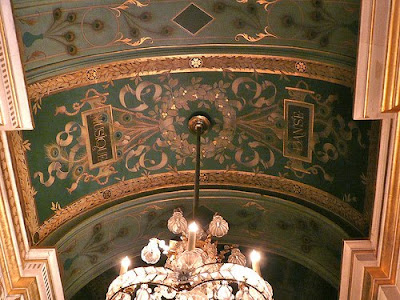