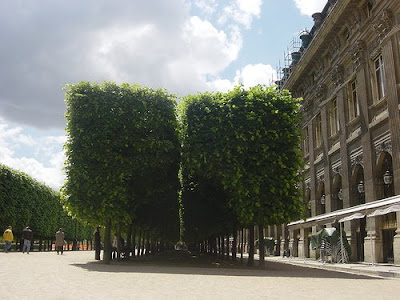 Cardinal de Richelieu, the chief minister to Louis XIII, bought the old Hôtel Rambouillet and its surrounding properties in 1624, removed the buildings and built a magnificent residence and adjacent garden, known as the Palais Cardinal. Part of the complex was a theatre, commissioned by Cardinal Richelieu in 1641, and it was here that Molière produced his plays from 1660-1673. When Richelieu died in 1642, he bequeathed the entire estate to the crown.

Anne of Austria, regent of France after the death of her husband, Louis XIII, moved here from the Louvre and raised her family, which included her son, the future Louis XIV, who came to be known as the Sun King. From this point in time the structure and garden were called the Palais Royal. Louis XIV, having grown up here, eventually gave title of the Palais Royal to his brother, the Duc d’Orléans, and his family lived here until the Revolution of 1789.

In 1781, the Duc d'Orléans, later known as Philippe-Egalitié (who owned and developed the Parc de Monceau), enlarged the palace and shrank the garden, allowing for the construction of residences with regular arcaded facades on three sides of the garden. These modifications was completed in 1784. To offset construction expenses, the Duc d'Orléans built boutiques under the arcades and rented them out, opening the Jardin du Palais Royal to the public. However, he still considered the space private property and barred the police from any authority over it. It thereby became a place of liberty not found anywhere else in Paris, a gathering place for intellectuals and artists – and eventually gambling houses and prostitutes.

In 1786 a cannon was set up on the prime meridian of Paris (which bisects the garden), in which the sun’s noon rays, concentrated by passing through a glass lens, ignited the cannon’s fuse. Firing this “noon cannon” was resumed in 1990.

By 1789, the Jardin du Palais Royal was the liveliest place in Paris. People came here to get the latest news and discuss political rumors. It was a place of speeches, discussions, drinking and gaming.

On July 12th, 1789, Camille Desmoulins, a young lawyer, jumped on a table inside the Café de Foy and broke the news that Jacques Necker, the popular Minister of State, had been forced to resign. Desmoulins called out, "Aux armes, citoyens!" (To arms, citizens!). Two days later, the Bastille was taken, and the French Revolution was underway.

Subsequently the Palais Royal and its garden became property of the State. Today the Ministry of Culture has offices here, and the Comédie-Française theatre still produces the plays of Molière and Racine. The more intimate Théâtre du Palais Royal is also housed in this complex. 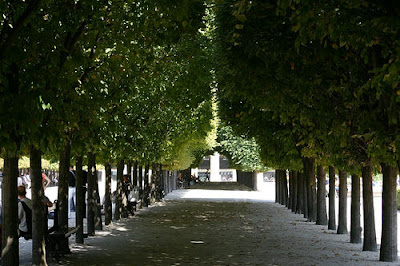 The garden retains its colonnaded arcades. The historic mosaics remain, fronting shops, galleries, restaurants and cafés, although the restaurant Le Grand Véfour is the only remaining establishment from the garden's pre-Revolutionary days. The garden, devoid of motorized traffic, offers a pleasant respite from the city’s clamor. Grassy lawns, rows of chestnut trees, sculptures, flowers and a fountain delight modern visitors, who can rest in peace on the shaded benches. A further enticement is that dogs are banned. 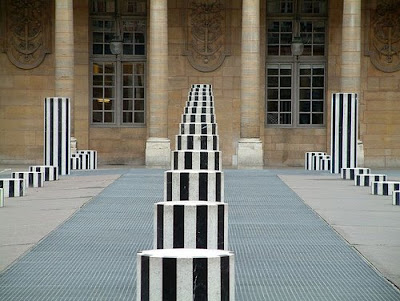 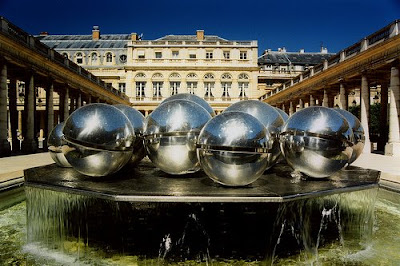 The paved courtyard of the Court of Honor is now home to a major work of modern sculpture, a set of 260 striped black and white columns of unequal height. The work of artist Daniel Buren, the columns were installed here among much controversy in 1986 (the State even tried to rescind its contract with the designer). The Orleans gallery, which separates the courtyard from the gardens, is where Belgian artist Paul Bury created sunken fountains and his sculpture of large reflective metal spheres. Chacun à son goût. 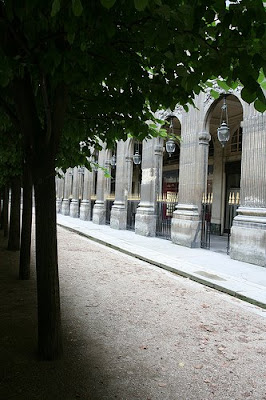 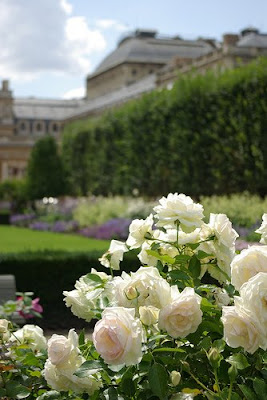 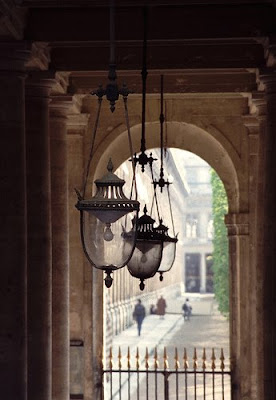